The founding of Cullom & Ghertner 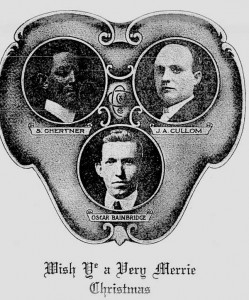 I’m reposting this because I just received a picture of J.A. (John) Cullom  Joseph Alexander Cullom (name updated based on his death notice here) , co-founder of the printing company and have information about the date of the founding.

Simon Ghertner was working at the Delcher Printing company and Mr. Cullom was the plant foreman. They became close friends and Mr. Cullom taught Simon ‘American money’ , a ‘lot of the customs’ and ‘took a great interest in me’.

When his pay went to $ 12 a week, his savings ‘more than doubled’ and he banked at Cities Savings Bank.

One day at lunch he passed a place on Fifth Avenue ‘”for rent”‘. That afternoon, he contacted the ‘Dealer’ and learned the rent. The next day Simon approached Mr. Cullom and told him he was planning on going into the printing business. Mr. Cullom agreed and the two used $ 450 between them to found Cullom & Ghertner. The next date I found with a reference to Cullom & Ghertner was Simon Ghertner’s World War I draft registration card dated 12 September 1918 on which he stated his employer was Cullom & Ghertner Co. located at 311 5th Ave. N. in Nashville, Tennessee.

Family members thought Cullom & Ghertner Printing company was founded in 1906 which differs from the Simon Ghertner autobiography account by Simon that the year was 1910. Here is what appears to be a $ 475  promissory note (from City Savings Bank) dated 30 November 1906 to Cullom & Ghertner and signed by J.A. Cullom so the 1906 seems more likely correct.