Lynton “Pappy” Scharff joined the US Army sometime during World War I and became a 1st Lieutenant. Between the World Wars, he was a member of the Army Reserves as a ‘weekend warrior’ and he participated in longer term exercises. 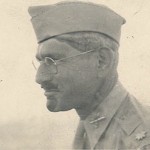 Lynton returned to service in World War II. For a time, Pappy was stationed at Ft. Carson (which opened early in 1942) located in Colorado Springs, Colorado; and he served as a Major in the 342nd Field Artillery (see 24 July 1942 as seen on his wife Em’s Military ID card date 24 July 1942) . 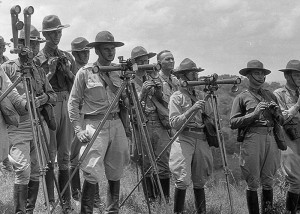 This undated photograph is thought to have been taken at Fort Sill in Oklahoma where he was a training officer. This penny postcard sent by Em and Pappy in late November, 1944 places them in Charleston, South Carolina and indicates Lynton was assigned to Fort Jackson (which is now an Army basic training facility) in Columbia, South Carolina. As Em & Pappy say further in the post card, they were dining on shrimp cocktail, clam chowder, soft shell crab, french fries, coleslaw and Tums! They were getting on a plane for Columbia that night.

Lynton did not serve overseas. His military records were most likely destroyed in a 1973 fire at the National Personnel Records Center in St Louis; discussed here. 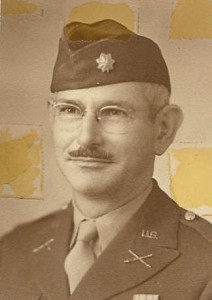 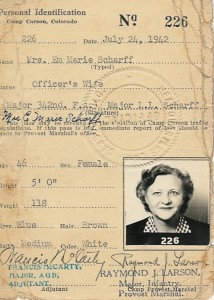 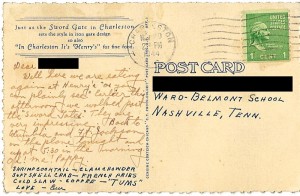