The Bloom family from Germany was prominent in Pine Bluff, Arkansas from the mid-1850s to the 1930s in business and politics. John Bloom (b. 1832 in Germany-1883) and his brother David (1824-1889) first arrived in the town in the 1850s as “peddler merchants”. John Bloom was a President of the Jewish Congregation Anshe Emeth (“Men of Truth”) in Pine Bluff; this was the first Jewish congregation in Arkansas to be charted by the state legislature on 13 March 1867 (B’Nai Israel in Little Rock was chartered five days later ( see LeMaster book page 53). The children of John and Fannie Bloom were Moses, Dinah,Mary, Charles, Emma, Simon and Emanuel Buckingham.

Simon Bloom, became the second Jewish mayor of Pine Bluff serving three terms from 1913 to 1919. Simon began working for Congressman Clifton Breckenridge and then worked for a railway. When he ran for Mayor in 1913, he defeated W. D. Boies who had used anti-Semetic tactics which proved unsuccessful. It was said Mayor Bloom “accomplished more with a depleted treasury than any of his predecessors who had more money at their command”; he invited Carrie Nation to speak in Pine Bluff but the saloon owners objected. Simon Bloom, also a cotton grower, served as a second lieutenant in World War I. 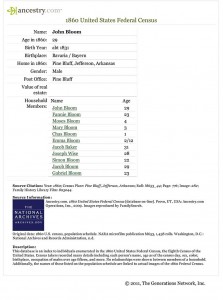 The 1870 US Census listed John and Fannie Bloom’s children in the household as Dinah, Charles A. and ‘Buck’ (as shown on the 1870 US Census for Pine Bluff). E. B. ‘Buck’ (Emanuel Buckingham) Bloom (1865-1939) was also active in politics and the Chamber of Commerce. In 1860 the US Census for Pine Bluff enumerated three more children: Moses Bloom (age 4), Mary (age 3) and Emma (age 2 months), none of whom were part of the family Census record in 1870.  John Bloom and Fannie Bloom and their young son Moses Bloom were buried in the Congregation Anshe Emeth Cemetery, now part of Graceland Cemetery Pine Bluff.Charles A. Bloom and Grace M. Rhine were the parents of John Rhine Bloom (for more on his name see this) , who married Emma Marie Block, and their only child was Frances Jean, known as ‘Little Jean’. In 1908, ‘Buck” Bloom and his son Frank Rickey Bloom established a large insurance brokerage business in Pine Bluff, Arkansas. 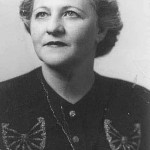 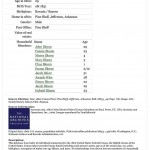