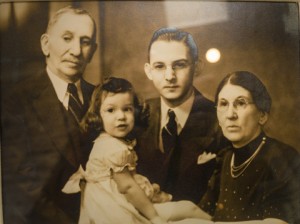 While visiting Nashville for a Bar Mitzvah, I had a chance to see this rare photo. It was taken about 1937-1938. This is the only image of Lewis Cooper I’ve seen; and only the third image of my grandmother, Dora. He was born about 1859 in Russia. His wife was Dena and they had (at least six) children : Jacob, Dora, Annie, Ada, Essie and Harry, Jacob and Dora were born in Russia . All the Cooper children were born in Tennessee. The Russian Army was drafting young men into the Army and perhaps Lewis ‘picked up stakes’ to avoid that.

Gray haired Ada, Annie and Essie never married and they lived together in Nashville during their later years. I also have a vague recollection of  Harry Cooper as having a wife.

Dora Ella Cooper was Simon Ghertner’s wife and they were the parents of Alven, Gerald and Leonard (my father).

This entry was posted in Personal conversation, Uncategorized and tagged Cooper, Ghertner. Bookmark the permalink.