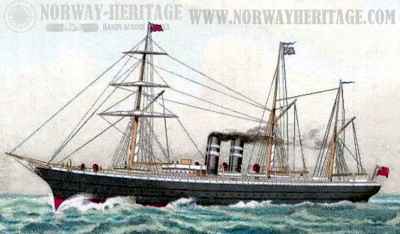 I’ve found more than one record of Simon Ghertner, my grandfather,  having sailed to North America about 1900.  The steamer  Lake Ontario was built in 1887 by James Laing & Co for the Beaver Line. A voyage on this ship is the most likely one that carried my grandfather across ‘the pond’. In confirmation see this post, from Simon Ghertner’s autobiography in which he stated he sailed from ‘Romania’ on ‘a boat’ ‘the Lake Ontario‘. He wrote that he arrived in Winnipeg in 1903 and as Winnipeg, Manitoba is 2,200 km. inland from Montreal,  I doubt that is correct.
The vessel was 4,502 gross tons and it was 374.5 feet long ‘between the perpendiculars’,  43.5 feet beam and 32 feet 8.5 in. of depth. Water was used for ballast. The triple expansion cylinders were constructed by Sunderland and ” had cylinder dimensions of 31 in., 51 in., and 83 in., with a stroke of 54 in.,”. Working boiler pressure was 150 psi. As protection from floating ice. “the plating of the bows was doubled and strengthened with extra keelsons and stringers“. The design of the stern was ‘the traditional Beaver clipper stern’.
The Norwegian-Heritage ship’s sailing lists (here)  do not include Simon Ghertner’s name or voyage but the Norwegian Heritage site does admit their information may not be complete; I sent a message to mention Simon Ghertner’s ‘s voyage. See my discussion ot the spelling of ‘Ghertner’ here.

The passenger list (I found at Ancestry.com) of his voyage aboard the Lake Ontario has the most historical pieces that ‘fit’ with the facts I know. The sip carrying Simon arrived at Montreal, Quebec on 20 July 1900. 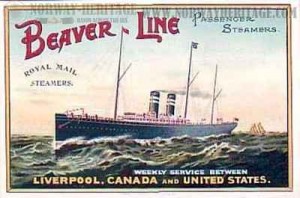 The Beaver Line was created in 1867 as the Canada Steamship Company and the first four sailing ships ordered were Lake Ontario, Lake Erie, Lake Michigan and Lake Huron. The company flag showed a beaver so it soon became known as the Beaver Line. In 1874 they started ordering steamships and operated transatlantic voyages between Liverpool, England and Quebec-Monteral (summer) and Liverpool and St. John, New Brunswick (winter).

This entry was posted in Web Link and tagged Ghertner, Simon Ghertner. Bookmark the permalink.