‘Circuit Riders’ .. Rabbis that is 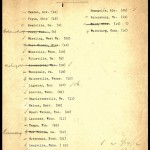 July 1912 Letter from Hebrew Union College to Congrgations without Rabbis

Part of the training for American Rabbinical students at all three Hebrew Union College campuses is to travel to under-served Jewish communities to conduct worship services. The Jewish Archives in Cincinnati has letters dated in the 1890s

from the Hebrew Union College Administration to local congregations regarding placement of student Rabbis. When the program began, students only traveled for High Holy Day services. I have a copy of an 11 July 1912 letter sent to congregations with no Rabbi (twenty seven are listed  and 5 are crossed off). Camden, Arkansas and Port Gibson, Mississippi are on this list.

Congregations were started in Camden, Arkansas (1870 and named Beth El Emeth “House of God of Truth”) and Pine Bluff Arkansas (in 1866 and named Anshe Emeth “Men of Truth”). These communities flourished but later the Jewish populations declined.

Today, Rabbinical students visit far flung towns on a monthly, twice monthly or High Holy day basis; the local individuals pay the expenses plus a stipend to the student. The community determines the frequency. All students participate.