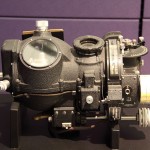 The Norden bomb sight was a tachometric device (which incorporated an analog/mechanical computer and linkage to the airplane’s autopilot) that was used by United States forces to help the crew drop bombs on selected targets from high altitudes in ‘precision’ bombing raids.. It was first used in World War II by the US Army Air Corps and the US Navy. Victor Adding Machine Co. manufactured these during WWII.

Boastfully, bombardiers claimed the Norden bomb sight enabled them “to hit a pickle barrel from 20,000 feet” but the actual results were inconsistent, generally poor. Postwar analysis attributed this to winds

that the bomb sight was unable to calculate and to cloud cover (bombs were aimed visually). The Norden device was treated with great secrecy, being loaded onto the bomber just before takeoff and removed after the end of the mission. Crew members had to take an oath to protect the bomb sight with their life to keep it from falling into enemy hands. The US air Force continued to use the device in the Korean and Vietnam Wars.

This entry was posted in Web Link and tagged Ghertner, Leonard. Bookmark the permalink.