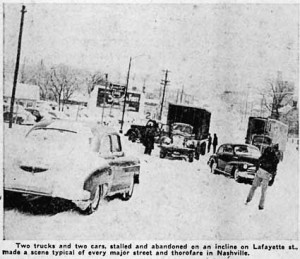 In 1951, my family lived at 1702 Ashwood Avenue in Nashville, Tenenssee, which was the house where my father and his brothers were raised (Simon and Dora Ghertner had lived there since at least 1920). When the storm struck we ran out of milk so my dad Leonard trudged out in the snow for groceries. He came back with milk alright but all the store had was buttermilk my baby brother and I would not drink.

A major ice storm that impacted Nashville was known as the Great Blizzard.  The storm began on January 29, 1951 and lasted through February 1, 1951.  This 4 day storm produced approximately 8 inches of ice and snow and severely impacted several aspects of the city.   It was of large significance because of whom and what was impacted. Residents of Nashville, the businesses, several transportation venues, and communication were all affected in one way or another. [1]

Here’s another view from the Historic Nashville blog.

This entry was posted in Ancestry.com and tagged Ghertner. Bookmark the permalink.