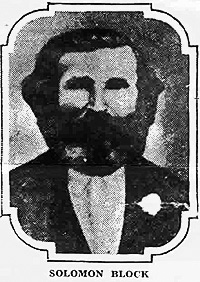 “….Solomon Block, one of the earliest Jewish settlers in Camden and the first president of the local congregation. As head of the local school board, Block fought off attempts to require bible reading in the public schools. When supporters amended the proposal to require that only the Old Testament be read, Block remained steadfast against it, believing that religious instruction had no place in the public schools. Block was a successful businessman, owning a large mercantile firm with his partner Edward Feibelman. The two later purchased a 1,900 acre sugar plantation on Bayou Teche on Louisiana, which Block managed. Block had married Mary Levinson of Washington, Arkansas, which shows that Jewish immigrants were able to find Jewish spouses even in 19th century Arkansas. Solomon Block died in 1886.” Source Goldring/Woldenberg Institute for Southern Jewish Life”

Solomon and Mary Block purchased the historic  Benjamin T. Powell Home in Camden, Arkansas after the Civil War from Joseph Powell, son of Benjamin. It appears Block sold the house (to Mr. W. E. McRae) shortly before his death 22 October 1886. This is an ornate Antebellum home.

This entry was posted in US Census, Web Link and tagged Block, Solomon Block. Bookmark the permalink.