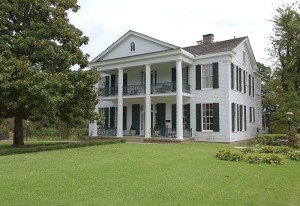 The historic Benjamin T. Powell House in Camden, Arkansas was placed on the National Register of Historic Places January 21, 1974 (REF # 74000485) and it is one of 36 sites in Ouachita County Arkansas so listed. From the Ouachita County Antebellum & Historic Homes webpage:

“The McRae home, located at 305 California Street was built in 1856 by Benjamin T. Powell. The house was coated in “Steamboat paint” (today known as white enamel). One of it’s main features planned was a handsome stairway of hand-carved black walnut. Before the house was completed, however, the war began, and the walnut shipment was delayed, so the stairway was constructed of Arkansas pine.”

“The house was eventually sold by the Powells to Solomon Block who in turn sold it to W. E. McRae of Mt. Holly, in 1886 (emphasis added).” (Solomon Block died 22 October 1886 and is buried at Jewish Rest Cemetery in Camden, Arkansas.

The significance of the home is validated by it’s having it’s (as of 30 April 2011 this web page does not exist but I did not make this up) , from which I obtained this descriptive information:

“The Powell-Dietrich House is a two-story frame house, with evenly spaced bays across the front. The foundation of the building is of handmade brick, with frame and siding of cypress. It has a gabled roof. The original roof would have been made of cypress shingles. The porch roof is a gable extended from the main roof and ends in a Classic Revival pediment. This portico is supported by four round, slender fluted columns and pilasters. There is a gallery on the the first and second floors. Both of the galleries are accessible from the house, there is an ornamental iron railing between columns on both porches, the iron grill work is reputed to have been installed at, or near, the original construction date. The doors have been refinished to the natural wood. Door hinges on exterior and interior doors are original, but some of the doorknobs and plates have been replaced over the years. The oak floors are original. The walls are the original plaster over split lathe with only minor repairs having been made over the years. Fireplace mantels are original, as are all of the door and windows moldings. The molding around doors and windows in some rooms is twelve inches in width. The main entrance on the first floor is a large single entry door with rectangular sidelights and transom. The door is void of any trim such as pilasters or entablature.”

“The house boasts one of the few circular stairways in south Arkansas. The original plan was to have the stairway made of black walnut, hand carved, but before the house was full completed the Civil War started so it was necessary to finish the work hurriedly and use Arkansas pine instead of walnut. The walnut lumber which had been purchased in advance was finally given by Mr. Powell to some Confederate soldiers in Marmaduke’s command, who made of it many useful and beautiful articles of furniture which were sold in order to eke out their scanty food supply.”

“Itinerant Italian plasterers reputedly made the decorative plaster medallion in the entrance hall although it is impossible to confirm the accuracy of this statement, or to pinpoint the date.”

“There are three internal chimneys with corbel led cars extending from the roof.”

“The access to the second floor gallery is a single entry door with rectangular sidelights and transom. The door is a glass panel type, three lights wide by five lights high. This door has neither pi or entablature and is without shutters.”

“Except for the noted minor alterations, the house is basically original.” 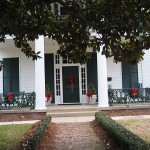 to Mr. W.E. McRae. In the mid-nineteen twenties Mr. and Mrs. Carl Ramsey owned the house. It was then sold to Mr. Elbert Godwin and occupied by the Godwin family until 1962 when it was sold to Mr. R. Paul May. Dr. Fred W. Dietrich bought the house in October of 2000.”

“In the spring of 1861 Benjamin Powell’s eldest son, John Powell, joined the Confederate Army and went to war. While serving in the East he sent home some young cedar trees from Acjuia Creek, where his unit was encamped. John did not live to see the trees he so lovingly sent to his mother as he was killed in the battle of Chickamauga and never returned home to see them. The cedar trees are gone now.

During the wartime the house was the scene of a wedding when Miss Eleanore Matilda [Mattie] Powell, a lovely, dark eyed girl, became the bride of Mr. Horace Jewell, a chaplain in the 33rd Arkansas regiment. 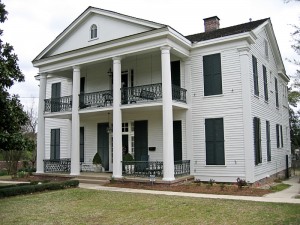 In April 1864, there was a great stir and bustle in the home one-day.  Rumors had reached Camden of the approach of the Federal army under Gen. Steele, and soon the boom of cannon was heard from Ft. Lookout and Southerland, but in a very short time the Confederates began retreating through the town.  The ladies of the Powell family gathered at the front gate with buckets of fresh water and baskets of cooked food for the boys in gray.  A few hours afterwards the Federal General Rice established headquarters in the Powell home, where he remained until the night Camden was evacuated.  “

Here is a map to the Benjamin T. Powell house.

Colonial Dames dedicate local Sites of Historical Significance
The Ouachita Valley Chapter of Colonial Dames XVII Century dedicated the McCollum-Chidester House, Leake-Ingham Library, Oakland Cemetery and the Powell-Dietrich House as sites of “Historical “Significance” in the Camden area at a marking ceremony Saturday afternoon at the McCollum- Chidester House with a reception following at the Powell-Dietrich House. .. These sites are currently found in the National Register by the Dept. of Interior and will also now be listed in the National Society of Colonial Dames XVII Century Register of Historical Sites as places of “Historical Significance”. 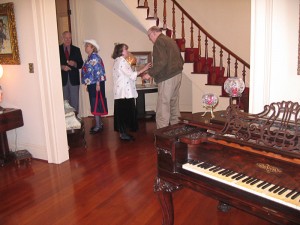 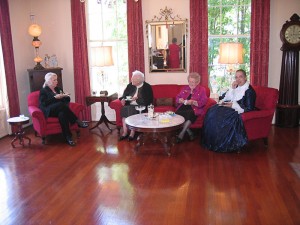 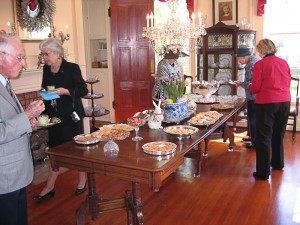