Eduard Scharff, (b. 11 Jan 1857 in Kleinfischlingen, Rhein Pfalz, Germany) emigrated to the United Sates at age 14. Previously I’d had no information as to when EL’s grandfather passed away.

Eduard Scharff, residing in Welsh, Louisiana, USA applied for a United States Passport on 7 May 1894. Eduard stated his birth date was 11 January, 1857 and his place of birth was Rhein Pfalz, Germany; which appears to have been a reference to the Rhineland. Eduard had a rice farm in Louisiana.

On June 8, 1909 in Matagorda County (quite probably in First National City Bank in Bay City), Texas.  Eduard Scharff applied for another passport (application posted here) and he was traveling with twelve year old Lynton, Eduard stated that his birthplace was the town of was Kleinfischlingen (find it here) in the Rhineland-Palainate state of Germany. (Many thanks to the German Consulate in Chicago for deciphering the handwriting of that town  and locating it’s website, in German of course). And Pappy’s father swore that he had emigrated to the United States on or about October, 1973 aboard the Koln Frankfort which sailed from Bremen, Germany.

He was a wealthy man; he owned a rice farm in Louisiana. He was patriotic, as was his only child, Lynton “Pappy” Scharff. At age 60, Eduard was too old to serve when the United States entered World War I in April 1917.

Parts of each recollection are true. In January 1918 the pandemic of “Spanish flu” was reported; it is estimated to have caused the deaths of as many as 3% of the world’s population;  and although many flu victims did contract pneumonia (which was a proximate cause of their deaths), Eduard Scharff had contracted pneumonia at least two months before the outbreak of the pandemic. When his son Lynton “Pappy” Scharff died in 1985, he too was cremated and his ashes were scattered in the Arkansas River in Little Rock.

Pulmonary illnesses were the causes of death of Esther and Eduard Scharff. 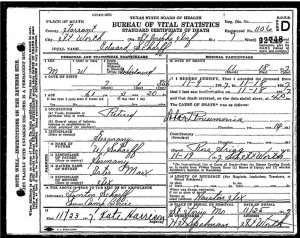 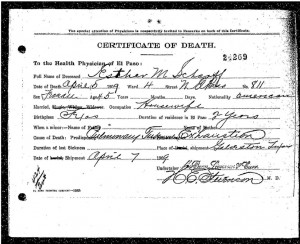