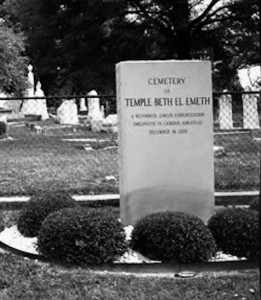 In the 1800s, Jews settled in rural Arkansas near rivers, which provided reliable shipment of goods. Camden (Ouchita River) and Pine Bluff (Arkansas River) are significant for our family. Our early ancestors were merchants as were many early Jewish settlers. There were temples in Camden (see Temple Beth El Emet) and Pine Bluff (see Temple Anshe Emeth “Men of Truth”). These references from the Goldring-Woldenberg Institute for Southern Jewish Life (or ISJL) explain the founding, growth and the decline of Camden and Pine Bluff Jewish populations.

Solomon Block (1826-1886), a tobacco and liquor merchant from Bohemia, helped found the Beth El Emet Congregation in December 1870 and he was it’s first president. In 1913, the Beth El Emet congregation had only 11 members and no Rabbi, so services were conducted by visiting Rabbinical students from the Hebrew Union College in Cincinnati. It became clear in 1927 there was little hope for increasing the Congregation so the Synagogue was sold and some proceeds were put in trust for the perpetual care of the (Jewish Rest) Cemetery.

ISJL (the Institute for Soutern Jewish Life) attributes the decline of Camden’s role in the cotton business to the decline of the Jewish population (customers of Jewish merchants moved away so businesses were closed). 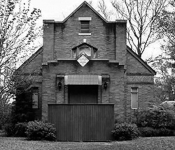 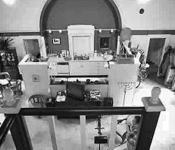 © These photos are used with permission of the Institute for Southern Jewish Life, Jackson, Ms.

John Bloom (1832-1883), a “peddler-merchant” from Germany was a president of the early Congregation. In 1867 Temple Anshe Emeth was the first Jewish congregation chartered by the Arkansas State Legislature (Little Rock’s congregation B’Nai Israel received it’s charter five days later). Jacob Bloch, Anshe Emeth’s first Rabbi, served until 1871. The congregation flourished in the late 1800s and outgrew the Synagogue so a larger one was built in 1902. The last Rabbi to serve Anshe Emeth was Rabbi Leslie Sertes from 1970 to the mid-1980s. Since his departure, a Rabbinical student from Hebrew Union College in Cincinnati has come to perform monthly (and High Holy Day) services which are now held in a Presbyterian Church. In 2003 the Temple building was sold and the proceeds helped fund maintenance of the Jewish cemetery. ISJL states “Only fifteen members still belong to Anshe Emeth.” but I spoke with one 70 year old congregation member yesterday (22 January 2012) and he told me there are only 11 or 12 member in the graying congregation which includes Jews from surrounding communities (including Jonesboro) as well.

As farming became more mechanized, the number of people required for agriculture declined and so did the number of customers for the stores of Pine Bluff’s Jewish merchants. Also, the families that owned stores Barre, Bain’s, Burt’s, Cohen’s, Levine’s, Kahn’s Jeweler’s and Rosenwig’s were aging and the next generation did not want to live in a small town and put in the long hours in retailing. 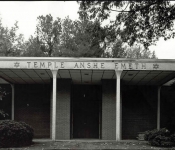 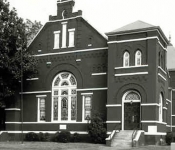 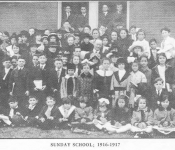 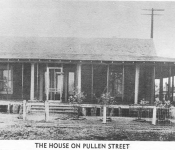 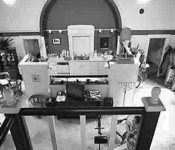 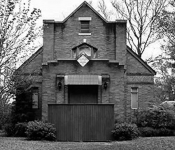 © These photos are used with permission of the Institute for Southern Jewish Life, Jackson, Ms.