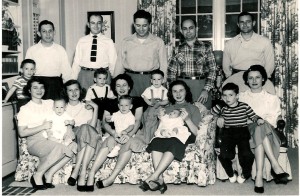 Little Rock, Arkansas was ground zero for the Block family in the 1950s as all the children of Joseph & Fay Block (Raymond, Samuel, Emma, Lewis and Grace) lived there. During Christmas break, the great grandchildren, the Block family Baby Boomers, would flock to Little Rock.

The page header photo is Em Block Scharff in the living room. 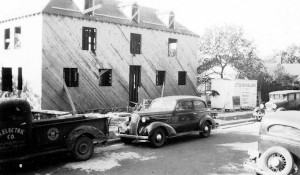 At the time of the 1940 Census, Em was listed as ‘Head of Household’ and the family’s address was 3719 West Maple in Little Rock. They built the Club Ozark house after their marriage on 15 June 1940.

The home of Em & Pappy was 3001 Ozark  (notice the Block family’s Little Rock Builders shed to the right in the photo) and it was directly across the street from the city’s water works. On Christmas Day, Em would give out the loot from her coin stash to her grandchildren. New Years Eve found us shooting off fireworks (firecrackers, Roman candles, cherry bombs) and rockets (some were bottle rockets) with the hope of  hitting the faraway water works building (I recall this happened once). Pappy made his famous egg nog with  more than enough bourbon for underage kids like me; Emma’s brother Lewis served a similar concoction to his grandchildren. Another highlight (low-light) was Pappy playing his mandolin (badly) and singing Abdul Abulbul Amir(also badly).

Second (Block’s) and third (Levy’s) cousins who lived in Little Rock joined in and we played poker in Em’s wood paneled den with a huge oriental rub. We had small wooden trains and we used the straight line patterns on the edges of the rug as ‘tracks’. Em also taught us to make prank phone calls.

Pappy had a gun closet in his bedroom, by the bed. We grandchildren were told never to go in there. I did open the door once and saw some shotguns; his 45 automatic was also inside.

When visiting, we’d eat breakfast in a small dining area off the kitchen. Often when we ate bacon and eggs, I’d chop up the crisp bacon & eggs; Pappy would chop up his sausage (not sure if links or patties) and eggs, which I’d not even thought of before.

The Nashville contingent flew (often only the children) in a noisy twin engine American Airlines Convair airliner in the day when in-flight  meals were served and it was ‘cigarette smoking only’ in the front section of the cabin.

It was Island X for Mexican food, Wes Hall’s ‘Radar Range’ (like this which we know call a microwave) equipped  Minute Man (his menu here ) and we couldn’t get enough unhealthy barbeque and Fritos at The Shack. 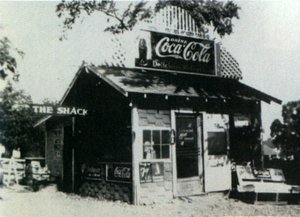 “A Shack barbecue sandwich consisted of meat, cabbage and sauce on a bun,” he writes. “This is a Memphis sandwich. Memphis is the Mecca of the ‘slaw on barbecue’ religion, and the farther away you get from Memphis, the less it is found until you cross into Texas on the west or the Carolinas on the east, where it disappears altogether. 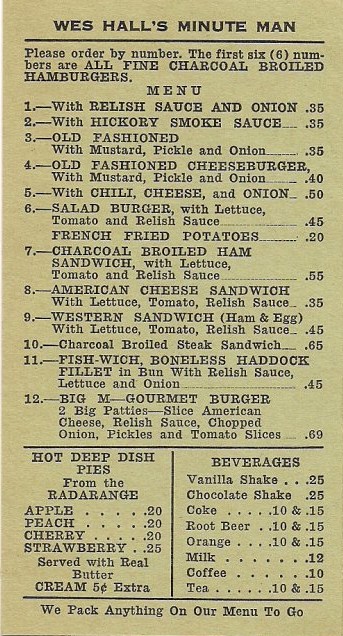