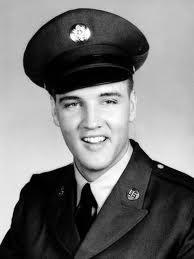 In October 2008, my uncle Lt. Col. Eduard Lynton “EL” Scharff (Ret.) told me that when Elvis Presley was inducted into the Army (in 1958), he was to have been assigned to (then) Capt. Scharff’s company. However, “EL” refused to have Elvis in his command because he wanted soldiers not entertainers in his company.(R.S. confirmed this). Actually Elvis turned out to be a good soldier and treated his fellow G.I’s generously.

This entry was posted in US Census and tagged EL, Elvis, Updated. Bookmark the permalink.

One Response to EL Scharff and Elvis Presley